Today was the start of the journey home.  Once again, I stayed in a budget chain hotel (ACE) in Clermont Ferrard, which is located just off the major highway, but also had a cluster of chain restaurants nearby (and coupons in the foyer to get a reduction on the bill – something I forgot the night previously).  I continue to get painfully full from delicious meals – at this Pizza restraunt, I had a ginger cocktail followed by a square pizza with camembert, some sort of dried meat, bacon cubes, onion and potato.  Amazingly good.  Followed it by a tiramisu made with speculoos, which is a spiced biscuit from the Netherlands or Belgium which often accompanies a coffee.

I forgot to set an alarm, but naturally woke at 8.30am (well and also 1am and 6am, but… you know…).  I enjoyed the 6E90 breakfast, almost identical to the day before – a large mug of hot chocolate, a yoghurt and two pastries.  When in France, right?  The buttery lightness of pain au chocolate and croissants is amazing when it’s done right!  Then back in the car.

For this leg of the journey, I decided to try taking the toll roads (or paege).  It cut a considerable amount of time from my journey (the GPS had been configured to remember ‘no tolls roads’ so it took some playing around to reverse that idea).  The initial projections were a four hour travel time, which would have had me returning the hire car after the 13h15 agreed.

The toll roads are wonderful – still spectacular scenery, but foot down and that’s about it – no roundabouts.  There’s at least two lanes everywhere, and three in areas where it’s hilly (so the trucks can take a slow lane).   There’s also a collection of tunnels, which are impressive too.  Overall, road rules and sensible driving abound.  Everyone stays right unless overtaking.  I’m not sure if it was forgetfulness or the rules, but many people leave the indicator ‘on’ whilst in the fast lane overtaking.  Generally speaking, there was little predatory behaviour, like following closely, though one Ferrari driver had a moment that saw me give him eye contact to say “your impatience will not see me cut in front of a large truck until I deem it safe”.

There was horrendous congestion on the approach to Lyon, and I worked hard with first and second gear, and didn’t one stall!  I did change lanes once or twice, and in hindsight, far right was the best (for the future turn, but also for traffic flows!).  I also, unexpectedly had an additional toll for using the city’s ring road. I haven’t a CLUE what the cost was, and just merrily inserted my card.  Devil may care… or… there’s really no backing out.

Once within Lyon ‘walls’, I had an easy enough drive, although the final turn was left, across two lanes of traffic, two tram lines, and then there were pedestrians crossing (or talking on their mobile and making me anxious whilst I straddled tram lines).  In the end, dilly dallying mobile phone man was ignored, and I proceeded. Car back! Safely!

It was a few blocks in the baking sun to the train station, which seemed to have increased the armed military presence.  I sat down for a little while to decompress after buying my ticket, and then grabbed some lunch (Starbucks… cause the French chain Paul had unbelievable lines). Then I boarded my train – not without a pushy women trying to cut the line in front of me, to realise.. wrong carriage.  I did say excuse me in French, but she may not be French.  Shame.  Seriously, forming an orderly queue is something most in France and Germany can master… tourists too! 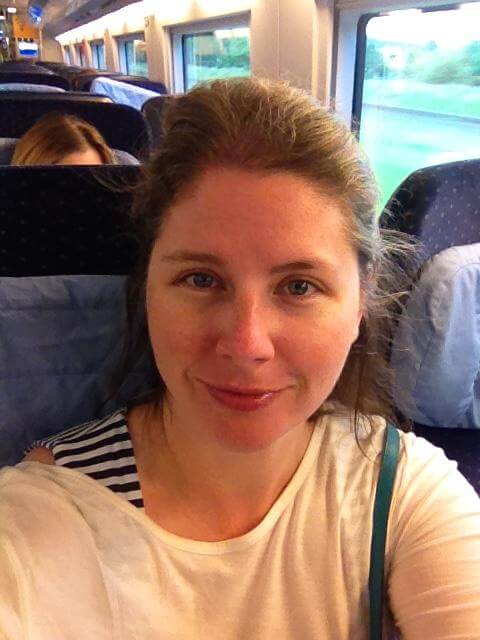