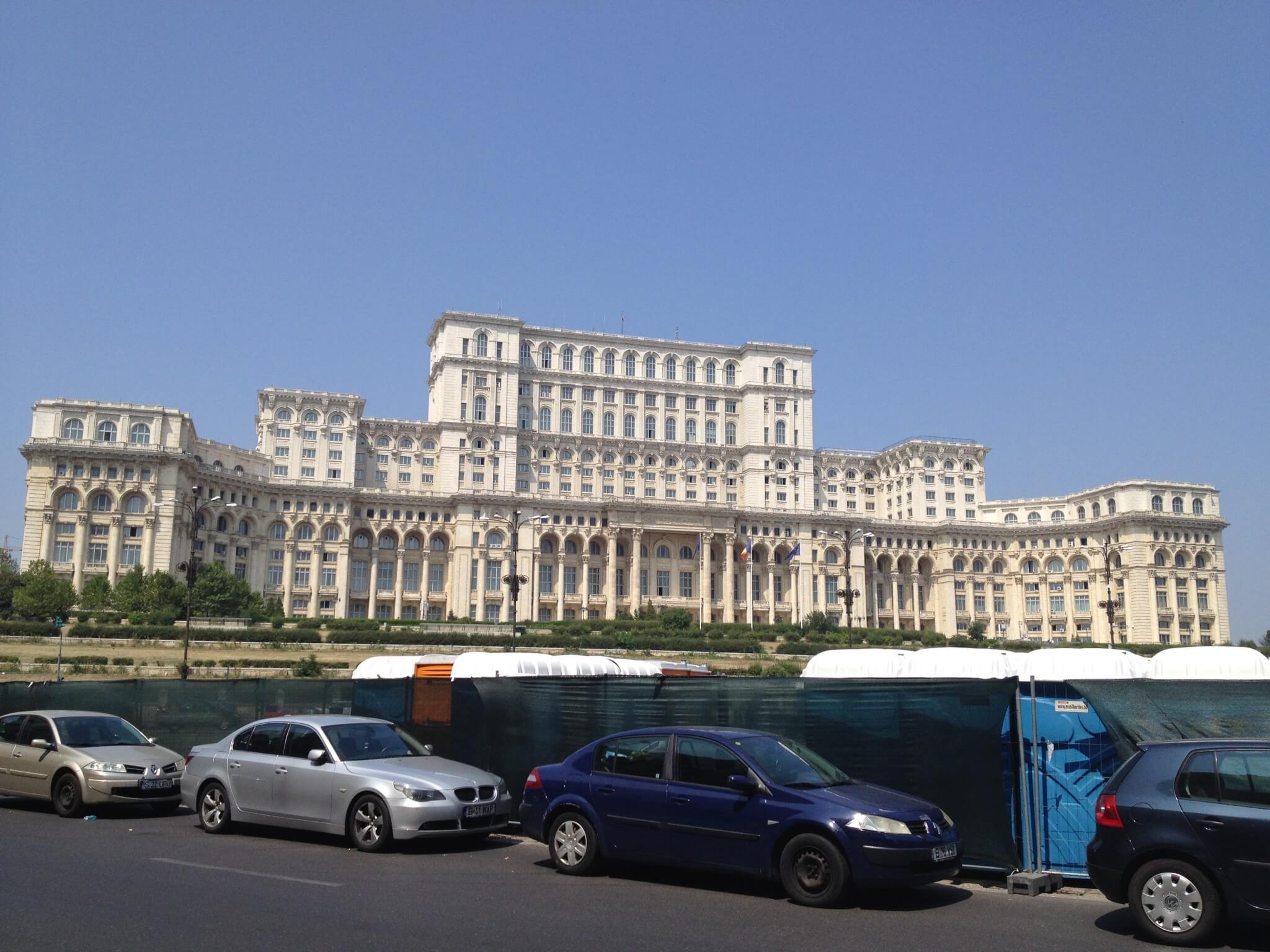 So, Bucharest is largely flat. Which explains why both our hotel and the city offer bikes, and there are also dedicated bike lanes in places. Also, the city’s layout is a little haphazard. Sydney’s suburbs aren’t on a grid but it can be explained by the hills and sandstone. Here, it’s not clear why streets curve and circle like they do. It does make navigating a little more challenging.
Today being Monday means there’s countless more cars parked in the streets around our hotel in addition to  everywhere! Yesterday we saw two cars parked a a back streets roundabout. There’s also some curb mounting action to get cars tucked in. It’s definitely closer to the French “devil may care” parking style than other parts of the world (Sydney!).
Our Segway guide was a lanky tanned guy, who clearly was accompanied by his father. His father was the same lanky body, but long blond hair for our guides long brunette hair. The guide mentioned that his mother and sister now live in Spain. He’d lived in London for eight years.
Below are my notes from our two hour communism guide Anita, who drove use around the city in her unairconditioned Dacia, with the other tourist, Vincent from the Netherlands. He seemed incredibly knowledgable and well travelled.
Orthodox: feel god near. Catholic: fell good is big and you are small. So with this in mind there’s a lot of controversy at the biggest church being built near the people’s house. Currently the largest is in Belgrade. They follow the Greek Orthodox tradition not the Russian.
Biggest civilian building in the world, though may be second after pentagon. All materials from Romania. Started in 1984 after his visit in China. Named the people’s house.  Almost completed by 1989 – when people are on minimal rations. Rations were often minimal, and due to electricity limitations, hard to store. Also, there was often a luck of the draw with other consumer goods so people called around to take and barter items. Our guide was once taken with her grandma to a store to queue for yoghurt, as there was a per person limit. The little three year old Anita would nap in her chair. Of course with just twelve people in front of them, they ran out of yoghurt. Didn’t build with air con as they were concerned for poisoning. Michael Jackson stood from balcony and said “welcome Budapest”.
Class a : government
Class b: intellectuals, separate living room
Class c: workers – small apartment, 1 bedroom, 40sqm
Class d: dormitories, unmarried people
The Russian style of communism apartments gas workers things previously only wealthy bosses have : private gardens, archways. So they built apartments with these features. And because TV and electricity was only for two hours a day, being a snoop was a good enough past time. Every building had a professional spy for the regime. If you said you drank coffee with your guest, it might suggest you got that on the black market as it was rations in the latter half of the regime after C had returned from visiting China.
Each suburb had its own factory, so that the people wouldn’t need to travel into the city.
Sorry if my notes are disjointed, but facinating!

4 Replies to “Communism tour in Romania”