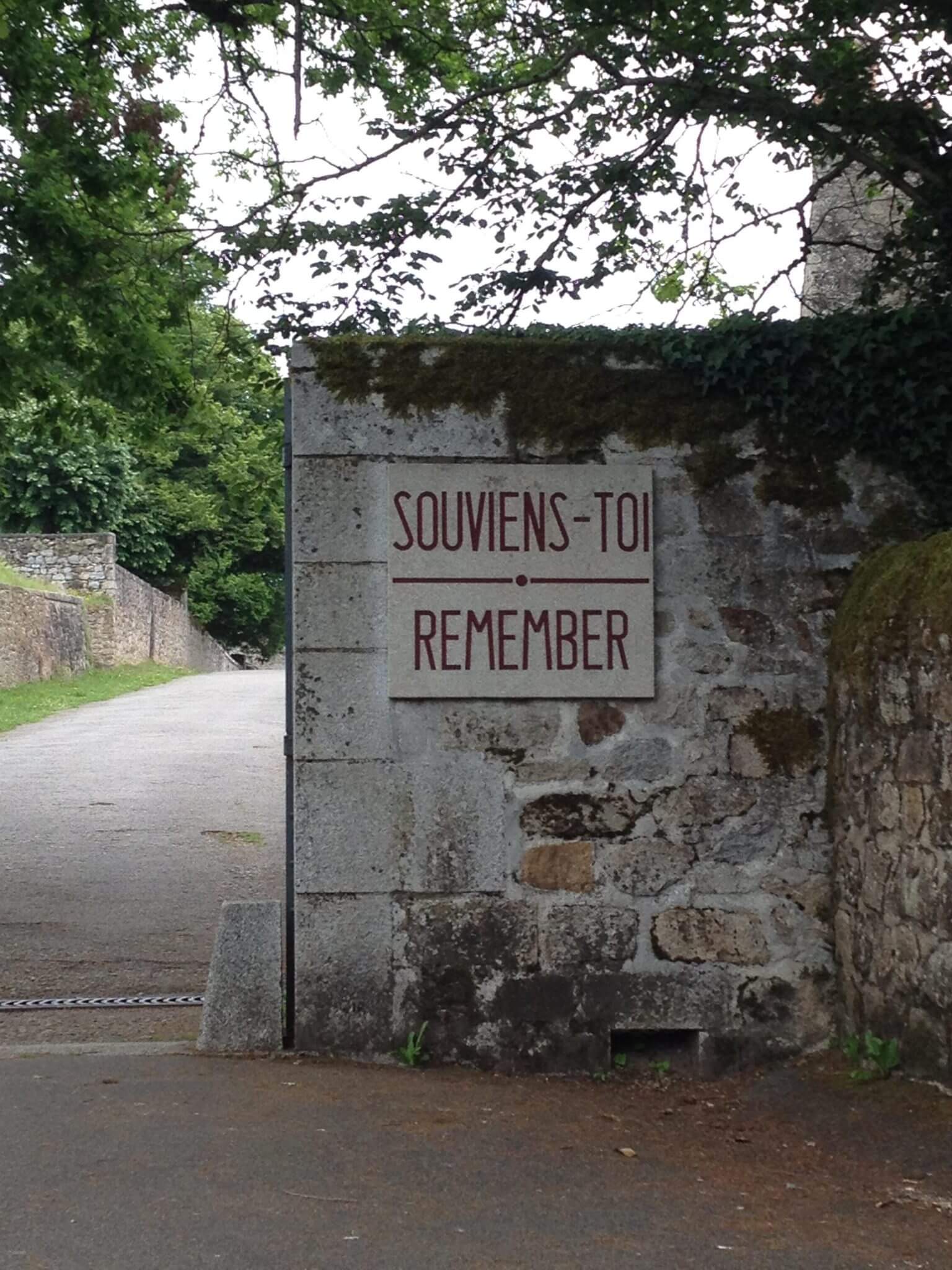 I’m pooped (read: exhausted) – I semi planned my driving so no one day would be huge.

Yesterday I drove from Lyon til a time (I think about 6pm?) which would be roughly two hours from Limoges which is where I’d set the GPS towards.  Oradour-sur-Glane’s closest large city is Limoges so it was a great thought when I was in the carpark in Lyon

So today was from my hotel to Oradour-sur-Glane, which saw me arrive at my destination at 11.30am, about a 2hr drive in some overcast conditions.  I even got to experience my first signposted road at 130kmh.

Oradour-sur-Glane is on a little river called Glane, and I arrived to gloomy overcast weather.  There is a striking sculptural element which is the building of the museum; which also serves as the entrance to the ruined town.  The town ruins are secured from time to time, such as overnight and between Christmas and New Year, and the hours extend with the summer weather.  THe entry to the town is free, but due to a good and natural design, you see a ticket desk, and enter the exhibit before realising that there’s an alternative.  The entry is 6E50 or thereabouts, so it’s not a major imposition, and it allows context to both the war and the town’s history.

The exhibit is in English, French and German, but there’s greater depth and details with the French.  In addition, there were audio guides, but I opted against.  I figured being able to read two languages would serve me sufficiently.  The exhibit, to the best of my reading, attributes the ‘attack’ on Germans in the area, and if I recall correctly, Hitler being in Vichy about the same period of time.  Alternative things I’ve read is that a village Oradour-sur-Vayres has heavy resistance involvement, and could have perhaps been the intended target?

The village was pretty vibrant by the businesses it sustained – there were a few garages, at least two ‘wheel makers’ (I had to learn a new word – I went home and googled).  There were makers of fabric, including wool, in addition to tailors.  There were a few hairdressers.  There were three schools – one for boys, one for girls and one for enfants.

The village is every bit as desolate as you’d imagine.  Ruins from 1944 are uncommon – they are usually centuries old.  Here’s a ruin when… people were similar to us – they had pocket watches and more modern conveniences.  My mother was 11 years away from being born.  It’s just incredible.  I think I find the proximity in time to these events more moving, more relatable.

The ruins maintain a level of ‘mise en place’ with larger metal things – bicycles.  Sewing machines.  Cars. Machinery.  I didn’t wonder about smaller items, until I came across a crypt of sorts near the cemetery, which contained granite displays housing items.  There were melted drinking glasses and bottoms. There were small toy irons (the sort one would put on the fire).  There were eyeglasses with pocket watches – many which stopped with the fires.  There were coins as well as a little paper money.  It makes sense that these items endured, but also that they weren’t left in the ruins for tourists to ‘souvenir’ and take.

The cemetery predates the tragedy, and continues to be an active cemetery. There are family crypts, and there are tributes to those entombed – crosses and plaques with the feeling (regret, souvenir) or the relationship (grand parent, mother, wife of etc). Some have garishly coloured fabric flowers.  Others have ceramic flower arrangements.  The older deaths are marked by a circular ceramic disc with painted script.

To memorialise the massacre, there is a central area with an obelisk.  A wall has the names inscribed, with ages., and the ground below is countless memorial plaques.  There’s also a number of stone tablets offered by groups and towns across France.  It’s clear the memory and impact of this tragedy is STRONG around France.  President Charles de Gaulle visited after the war, and a decision was made to maintain the ruins, and then rebuild a new town alongside.

I was interested to note that what I would deem a small village had it’s own tram line – which… didn’t seem necessary, given I walked to the extremities of the village as it remains.  Perhaps it was a signal of the wealth of the town?  In any case, as an electrical engineer, I was also interested to see this tram and electrical infrastructure remained.  Obviously removing it would comes with a structural impact on the buildings it was affixed to.  For me, I’m routinely fascinated by these sorts of things, and so was thankful to see ‘how it was’ and wonder… How did they mount brackets to buildings for village wide power – were there issues of who pays damages?  There was a variety amongst glass insulators and ceramic – glass appealing more to me, as it has a lovely blue hue.

As my time in the village passed, the clouds burnt off, and the sun came out in force.  It was easier to imagine the warm June day that it happened, it’s less than a month from the day I visited.

Once I’d walked all over, I decided to patronise the local village for lunch, as it seemed fair.  Initially, when the new village was built, it was not well received, it lacked the depth and history of a naturally evolving town or village, and seemed to be largely the same one colour.  It seemed like many sleepy villages in character, but I can agree, the architecture isn’t worthy of any praise.

I decided upon a pizza cafe with a lovely rear garden.  I got the most enormous plate for my burger and chips, most of the chips I left!  I joked that this was tourist size and would the man on the table over want to share!

Once I’d finished lunch, I left at about 15.35 and the GPS told me it’d be 19.15 when I arrived in Clermont Ferrard. <insert shocked face> That’s almost four hours, when google maps had suggested 2h55 and thereabouts.  And the GPS was pretty right – though… it did take me down what can only be called a track, to a bridge that was closed (and I failed to interpret the European signs, or trusted the GPS too fully).  In this semi off road situation, I stalled.  It was not the only time on this journey – also on a big hill (with people behind me) and in the middle of an intersection in the middle of fields (so… that’s between me and God… oh and you readers now!)

Honestly, though, I’ve really enjoyed seeing so much.  I haven’t stopped for every photo opportunity, but the diversity of the villages I’ve passed through, the changes in the landscapes.  It’s been incredibly pretty.  I’ve been on super fast highways and village streets (which are scarier, cause I often second guess if I’m going the wrong one in a one way).  And that 6km in what can be called a farm track, that has seen a lot of Spring growth! I thought the car was going to roll over and then what!?  Alas, it did not, it was just my healthy sense of catastrophe.  There’s also a healthy level of ‘you’ll get out of here ok’ – I have NO ONE else to rely on, so I’ve just gotta have courage and continue.  By and large, that courage isn’t misplaced, and things turn out fine.  A few times… in hairier situations, I quickly stop whatever podcast I have nattering away, so I can put a little more focus into the 2 tonne vehicle I’m driving!