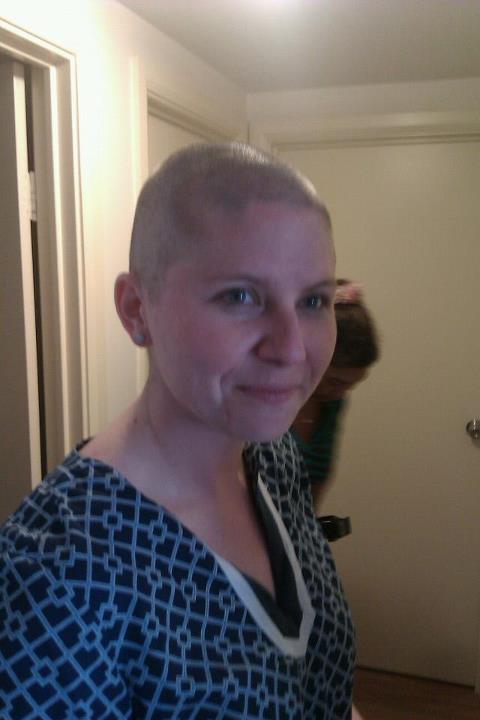 Many years ago, I was watching Oprah in my school holidays (stay with me here people…) and she interviewed some ladies who shaved their heads.  I was inspired.  It helped that these women were really positive about what they’d done – even if the audience seemed a little shocked.  Then and there, I made a silent pledge that if I ever knew someone with cancer, who’d be losing their hair to chemotherapy, then I would ‘lose’ my hair in support.

My grandmother got cancer in 2001, but I don’t think I’d seen the Oprah episode (or remembered it then), so it wasn’t until mid last year, when a Facebook message alerted me that a friend had breast cancer at the age of 31.  Her and a close (male) friend had only started dating in the last year, so the cancer diagnosis really accelerated their life’s plan! There were eggs to be frozen, and an engagement and then a wedding to plan – all around chemo and radio therapy sessions!

I was a little worried about broaching the ‘I’ll shave too’ idea – I’m not sure if I thought they (the couple) would think it was a funny idea, or lame, or just… I’m not sure – stupid/dramatic/overthetop?  So I figured I’d start with the boyfriend – whom I’ve known longer.  When he didn’t scoff at my suggestion, I thought I’d let him relay it back to ‘cancer girl’ and we’d see what happened.  Well… she was delighted! I’d started something!  In mid November, we had a ‘shave day’ – ‘cancer girl’ (who was two cycles in, and starting to lose hair by the clump), her BF, me, another two guys, and two girls.  A further female friend also lopped off her hair – to donate to a wig charity.  Sadly my ‘before’ hair wasn’t long enough to be donated.

Whilst it may seem altruistic, what I did, I thought I’d share all the reasons I was willing to do it (and whether all those reasons turned out as I’d planned)

1. To make my friend feel less like ‘the only bald girl‘: seeing we live a few blocks from each other, I hoped the check out staff and other people in our neighbourhood would just think the fashions were changing.  Entirely possible in our esoteric area!

2. To assist in fighting my psoriasis: whilst it’s easier to see (therefore I’m more self conscious about aggravating it), I don’t think it’s miraculously been improved by the increased vitamin D exposure 🙁

3. To save time in the mornings: now I can get away with a much quicker wash.  And no conditioner (and I was fighting to find a good, zero waste conditioner – the bulk one just wasn’t cutting it and neither was the solid bar from Lush).  For almost three months, I didn’t blow dry it either – I just towel dried to the Bart Simpson look! About a month ago, I decided to get it styled (cause… there’s a limit to the length of sideburns even on someone as gorgeous (jokes) like me), and now I blow dry it to style it, so I look more Anne Hathaway than Spike!

4. Making cleaning easier: Oh yes! It is SO much easier.  And I really realised after a house guest (with long hair) had been in my place for a few days – there was so much more hair everywhere!

5. To make sport easier: I play water polo and since November, I’ve not had to wear a silicon swimming cap at all (I still have to wear the funny ear protector playing caps though).  Even my running/gym sessions – I can do without my head band that I used to use to keep the hair out of my face.

6. Personal growth: I think this was the most important reason I wanted to try shaving my head.  I thought it would help with vanity and ideas of beauty and femininity. And somehow, once I’d decided to shave, I picked up a lovely BF.  Perhaps ‘hey, I’m going to Europe for three weeks and when I get back I’m shaving my head’ isn’t necessarily a normal second date conversation – but it is a good way to see if you have a keeper!

I was sure I was going to burst into tears when I saw my bald head – but I didn’t.  I felt weird – experiencing wind in my ‘stubble’.  And not having anything to ‘play with’ – you know, put up, restyle, brush…  I’ve had a lot of moments where I’ve looked in the mirror and gone ‘that’s not me’!  But I’ve worked through it.  I’ve had a wig, for when I’ve wanted to feel normal (it was retired about a month ago, when I got my hair styled – even though I’m not 100% in love with the current natural style, I’m 100% over sweaty wig wearing!).  I’ve certainly spent more than usual on earrings.  And worn a lot more make up, to make myself feel pretty on the outside.

Overall, I prefer the benefits of short hair to my longer hair (which I always always wore up!).  And, I was overwhelmed by generosity of others – mainly colleagues  who donated so much to support me in my head shave (either that, or they took me literally when I said they couldn’t pay me out unless they’d paid out!)  I was so pleased to raise almost $5k towards the research centre that my friend is continuing her radio therapy treatment now.  ‘Cancer girl’ in now enjoying fuzz, and she has a posse of male and female friends to guide her through the next few years of hair style trials and tribulations!

So, am I vain? Well I don’t think so, but I sat down and worked out how much it would cost should I do everything I think I should do, with my post The Cost of Being Vain