I can almost recall the conversation I had in the car with a boyfriend in 2005, about how I didn’t just want to ‘see’ places, but that I wanted to make sure I did that ‘thing’ that the place was known for.  Many would say The Netherlands is known for legalisation of marijuana.  Or prostitution.  Neither are of any interest to me!  What does spring to mind for me, with respects to Holland, is tulips.

Tulip’s didn’t originate in Netherlands, but they have a long and strong history since the first bulb was gifted from a Turkish man to a traveller who gave it to a famous Dutch man.  I’m aware that they had a stock market event named ‘Tulip Mania’ which google informs me was 1636 – 1637.

Today, visiting Keukenhof, I learnt why the Dutch have become so famed for tulips.  The sandy soil mixed with clay, combined with the mild winters are ideal.  And it’s not just tulips – any bulbs really.  The tulip gardens were filled with many daffodils and jonquils, and the pavilions also features lilies heavily too.  I’m ashamed to say, I’d not ever realised lilies were also bulbous. It’s interesting what my years learning and working in floristry have taught me, but also what I’ve totally missed!

Based on advice I’d read, I aimed to get to the tulip gardens at opening, 8am.  Given my AirBnB is only a 5 minutes walk, it seemed ideal.  Though, eight am did come around rather quickly, and I was still on the internet and updating life – having fallen asleep at my usual 9.30pm Europe Time, which was 4am Sydney time, so I was certainly due for a good lay down!  In the end, I arrived closer to 8.30am and I wondered why all the fuss about buying tickets online (which frustratingly wouldn’t work for me without my phone on roaming to get the confirmation code for using a credit card online). I left the park around noon, and took some photos to demonstrate why the advice is applicable!

My first hour, the place was largely devoid of people.  There was still a cool crisp air, and dew on the grass and birdsong the most overwhelming sound.  The light made it challenging to take photos as much was still in shade, or overexposed with sunlight.  By the time I came to leave, the sounds were various languages and accents! 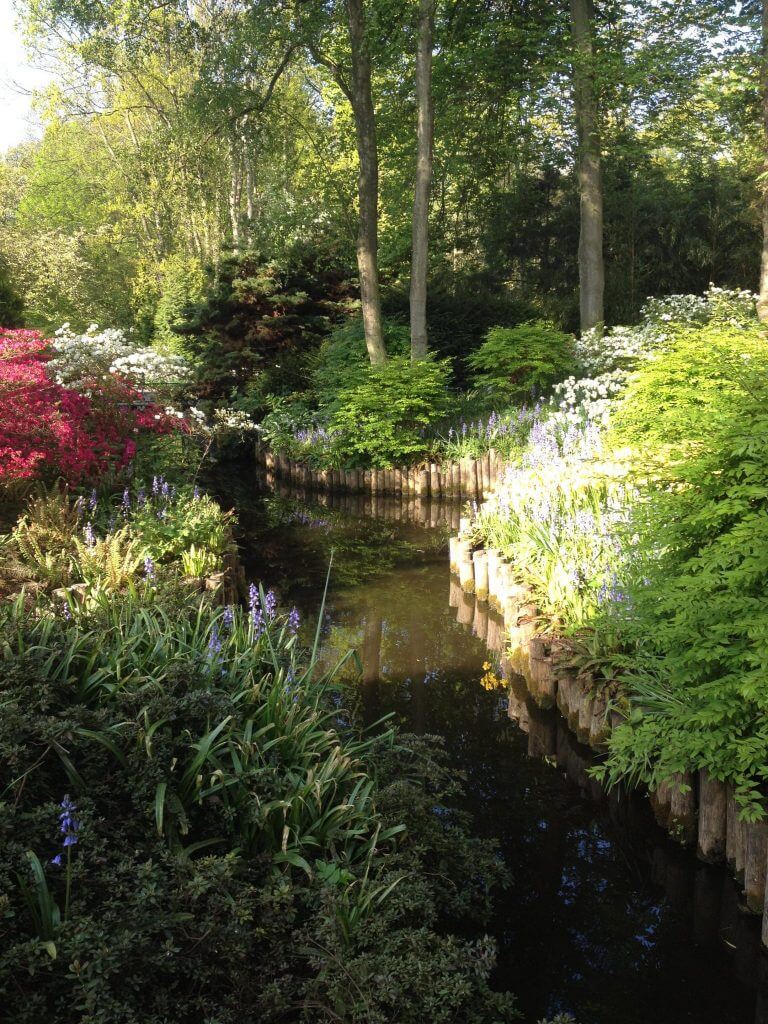 The gardens are beautifully laid out, and despite Holland being a flat country, significant work has likely been done to have hills and knolls and variety in the landscape.  There are many little canals as well as bubbling little water falls and mini lakes.  For children, there’s a play park, a hedge maze and a permanent petting zoo with RABBITS! (I’m not sure if my blog has ever expressed how much I like bunny rabbits and flirted with having one as a pet!).

There are a collection of pavilions at different extremities of the park, which include a museum with some background on tulips and their history in The Netherlands.  There is also a pavilion with avant garde arrangements, and from time to time, floristry presentations.  When I wandered by, she was making a simple arrangement, decorated with small potatoes threaded on wire! Funnily, potatoes are something I associate with the Dutch after a friend I studied with in 206 said her Dutch parents ate potatoes every night with dinner.  This pavilion seemed to focus strongly on chrysanthemums, which were otherwise not in the gardens or anywhere else.  Another pavilion was far larger and rather than being as focused on arrangements and artistry, was more coloured islands interspersed with home wares, or baskets or similar.  It was quite interesting.

I took a novel with me, and from time to time, sat amongst the beauty and read a few chapters. I had no where to be in any hurry, and figured a short rest wouldn’t hurt.

Travelling makes me relise how inherently lucky I am – by where I was born, to the parents that could afford the education they had as much as mine. Sure, there are countless nations where their population is growing in wealth, and you’re seeing more diverse ranges of ethnicities travelling – it’s no longer a handful of wealthy nations, but people from all over the sub-continent (old fashioned way of trying to capture India and it’s neighbours); Asia; Europe…

Of course, it’s luck as much as the career I studied for and work in. I realise I earn a significant sum of money, enough to manage a family on. I am one person, with this salary. And until I am supporting a family, I am saving some, paying off a mortgage, and doing the things on my bucket list whilst I have the time, money and mobility to allow me to.

It’s an absolute pleasure to return to cities and places I’ve been to once before – to recognise Amsterdam Schiponl airport! To arrive at Den Hague (The Hague)’s Central station and think… I know where I am. The familiarity, it’s reassuring and head spinning too! And with that comfort has me going to a Starbucks, where I know what to expect! I expect an overpriced coffee, comfy chairs, the ability to linger and hopefully some wifi. Add the Dutch spin of some Stroopwafels and I’m doing it with a cultural tilt 😉

The tulip gardens were just amazing – beautiful. So well maintained. A pleasure to visit and walk amongst God’s creations, so expertly arranged and planted. To realise this hope, this long ago item jotted onto a list, to see the ‘tulip farms’. I did! Meanwhile, the gardens are more than than a farm, but my short 5 minute walk to the ‘entrance’ there is quite literally a farm of tulips, still in bloom. They have largely passed the seasonal ‘heights’, so it’s not verdant colour everywhere, but enough to realise what was. The gardens are manipulated so that there are late blooming varieties, so whilst some gardens lay green, having been deadheaded, largely, it felt full and colourful.

I have almost 200 photos, and they are stunning (in my humble opinion!).